This post will hopefully be the first of a series of posts that we intend to make on a regular basis (once a month or every 2 months). We want to start showing everyone what we've been up to, and also give you guys a glimpse on the tribulations and decisions that go into developing BWO, because reality is the project is slowly progressing not only because of real life concerns for everyone involved, but also due to a certain attention to detail that we like to employ.

This time, I'm going to show you the updated version of a Vasudan fighter that you might have seen before on BWO's website, the GVF Selket. I guess that the best way to go about this, is to show you where it all started! 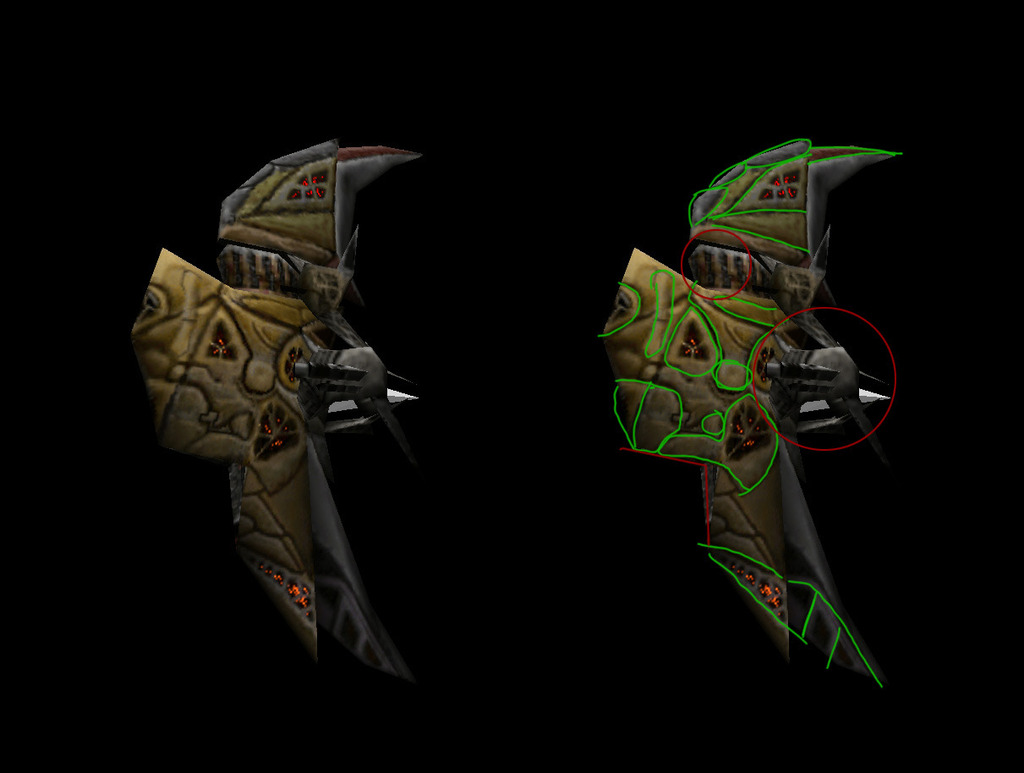 This is the original, pre-HTL Selket, modeled and textured by Bobboau, for an old and defunct project of his (Dark Breed, I believe). The important thing to note here, is that that campaign was populated by VasudanShivan Hybrids, which clearly influenced the design of the Selket. This theme of "union of technologies" is also quite prevalent in BWO, but we don't want to go so for over the top with it (it's not the main focus), so there will be some elements that we're not gonna translate into it's HTL form, in the end.

The first thing I did when I started this assignment, was to take a good look at the model, and identify the elements I think are crucial to the design (in red), as well as which lines I can use to build greebling (in green). Bobboau also chipped in a little, pointing out that he was quite proud of the cockpit circular shape, as well as that "tube" right behind it.

However, you'll see on the final ship, that it deviates quite a bit from the original. After some discussion, there was a general consensus that the original was too Shivan looking, and that we wanted to try another color palette.

Also, of course, I took a look at its specs and tech description, to get a better sense of what it's supposed to be. The best way of looking at it is as Vasudan Erinyes, with Shivan influences on its design:

A next generation of prototype heavy fighter for the modernising GTVA fleets, the Selket sits alongside the GVF Tauret in terms of its firepower and capabilities. The peculiar design of the Selket is clearly influenced by Shivan constructs. This confers it distinct advantages in speed and maneuvrability over the Tauret, as well as a small forward profile that makes it difficult to target with guns and missiles. Though some shielding has been sacrificed to achieve this the Selket carries massive primary cannon firepower and a small number of missiles. Overall the Selket is suited more evenly to defence and attack than the Tauret, but is by no means a replacement for it.

So I got to work: 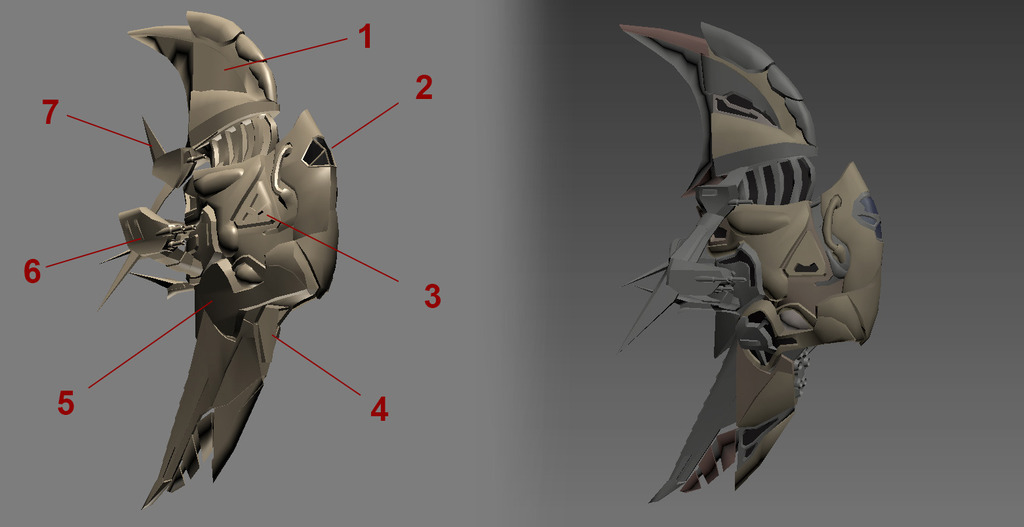 Keep in mind that these 2 images translate literally years of modelling and re-modelling. On the right is my first iteration of the ship, which even got UVmapped (by Kobrar44, when he was still with us) and somewhat textured. However, it had a few issues that were always bugging me:

1- I knew that that area was going to get some light recesses, which I thought I could get away with normal mapping... however, that wasn't really working, so I needed to do some more 3d work on that

2- The cockpit wasn't really fitting with the rest of the design language, not to mention that it wasn't as interesting as Bobboau's 3 pixel texture blob :P

3- That area looked a bit too strange for me, didn't fit with the rest, and was looking too shivanish...

4- The missile launcher was too bland, needed more detail

7- That spike was a bit too much in my opinion.

Before jumping to the image on the right, it's worth showing a step somewhere in the middle:

You can see that some of those points had been addressed here, but not all. However, it was important to me to start some sort of texturing process, to get a better idea of what I needed to do, as well as start experimenting with colors and patterns.

I still wasn't satisfied with the lights, they looked too alien. The cockpit and gun pods were looking quite rad in my eyes. I settled in more mechanical gun pods, to contrast with the other, more organic shapes.

Going back to the above image, on the right we have what was pretty much the final version of the model: I settled with a honeycomb design for the missile launchers, took the light recesses on a more mechanical direction. As a bonus, I also added a bit of detail in that area behind the tubes, something that would make a huge difference in terms of shading, after the final texture was done.

I moved to actually texturing it. Like I mentioned before, we wanted to try a different palette from the original. I got somewhat inspired by Oddgrim's HTL Osiris.

For the first time, I used a lot of free painting techniques, instead of layering exclusively. I kind of like the more organic looking result: 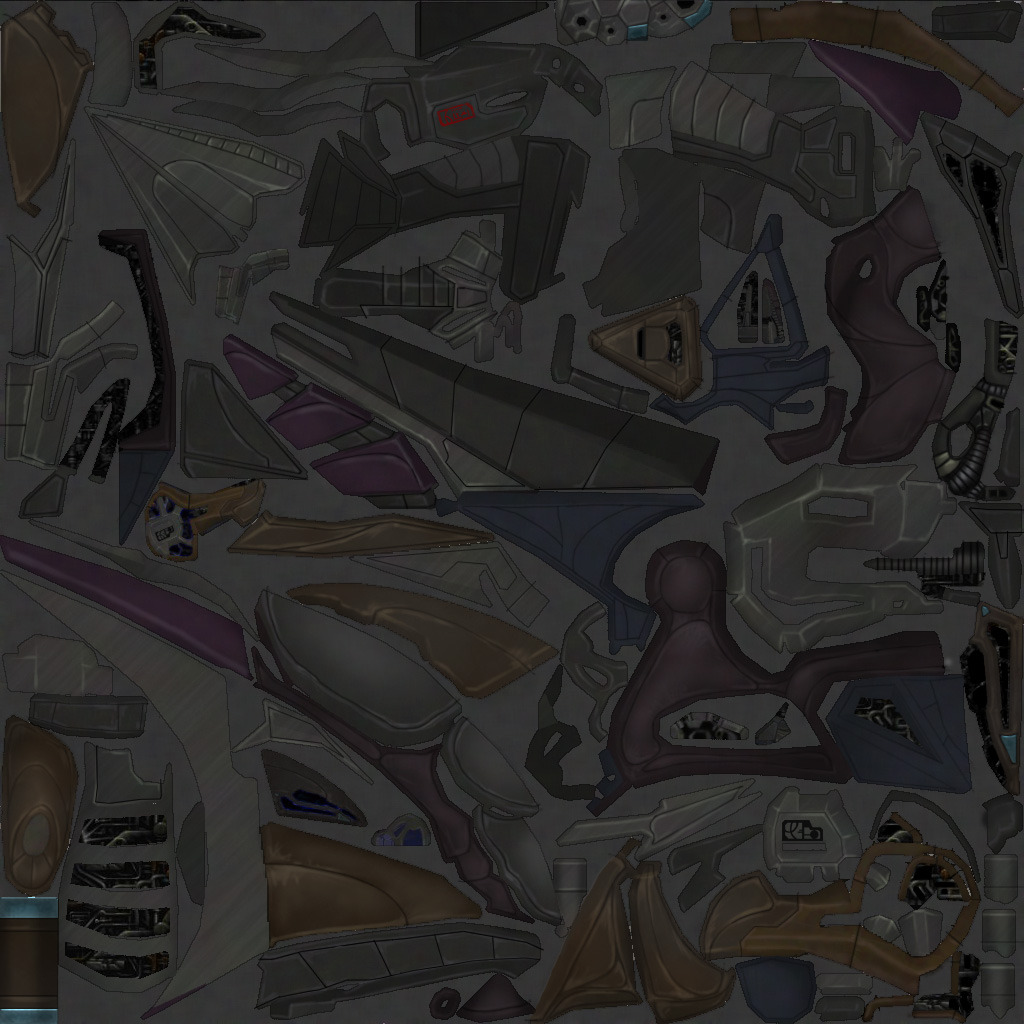 Keep in mind that the texture in the p3d isn't the final version, but it's quite close to it. In any case, it will let you see the final model.

Another thing to note, was that I tried some color variations after conversion (the bulk of it was done by Droid), for the glows and shine maps. I always take care of the shine and normal maps after the model is in-game, to see for real how it's going to render.

In the image below, you can see 3 of those variations. The alternative on the right is the final version.

As I was working on the texture, Kobrar built LoD1, and I took a moment to generate the other LoDs and debris from his work. Note that you can see yet another palette variation on this p3d...

By this point, the Selket was pretty much done here's the final product, from various angles, as well as an ortho sheet. 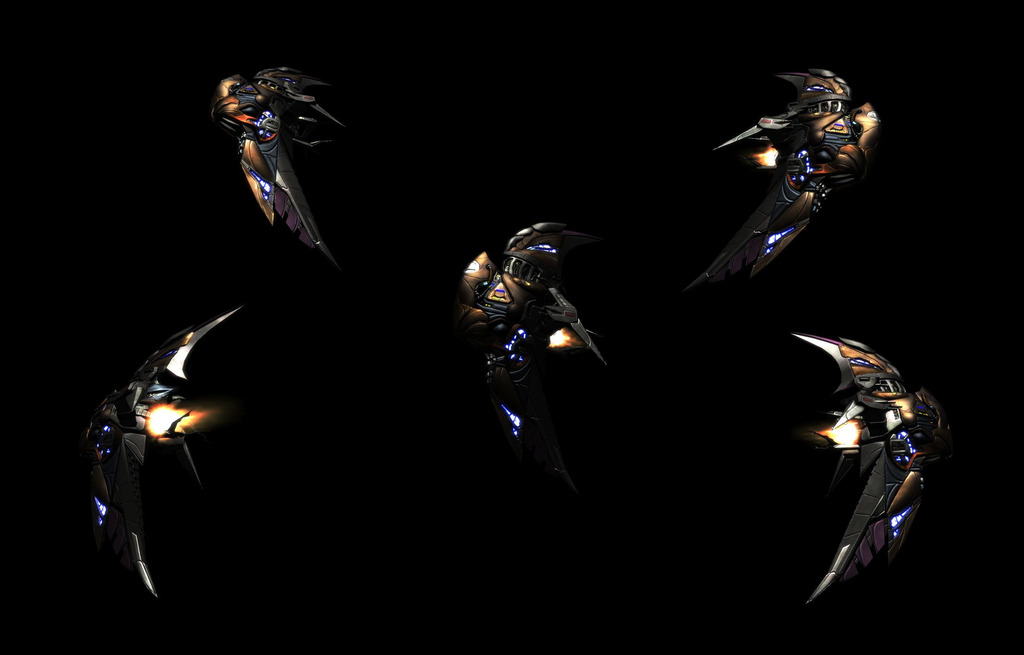 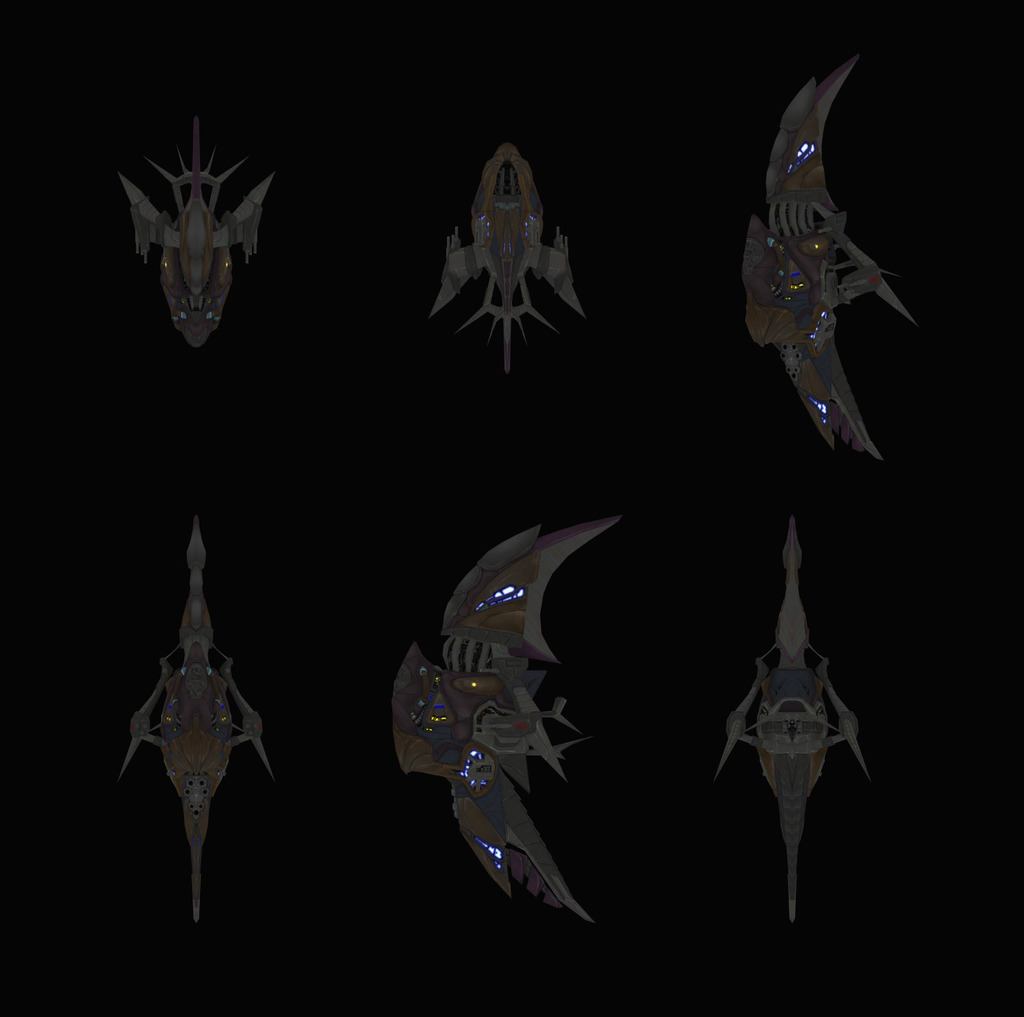 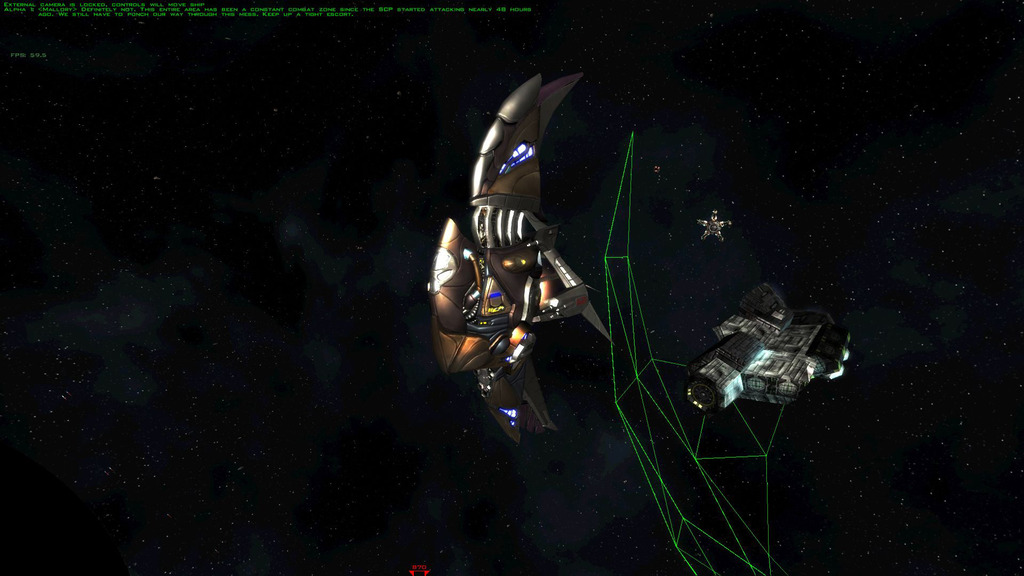 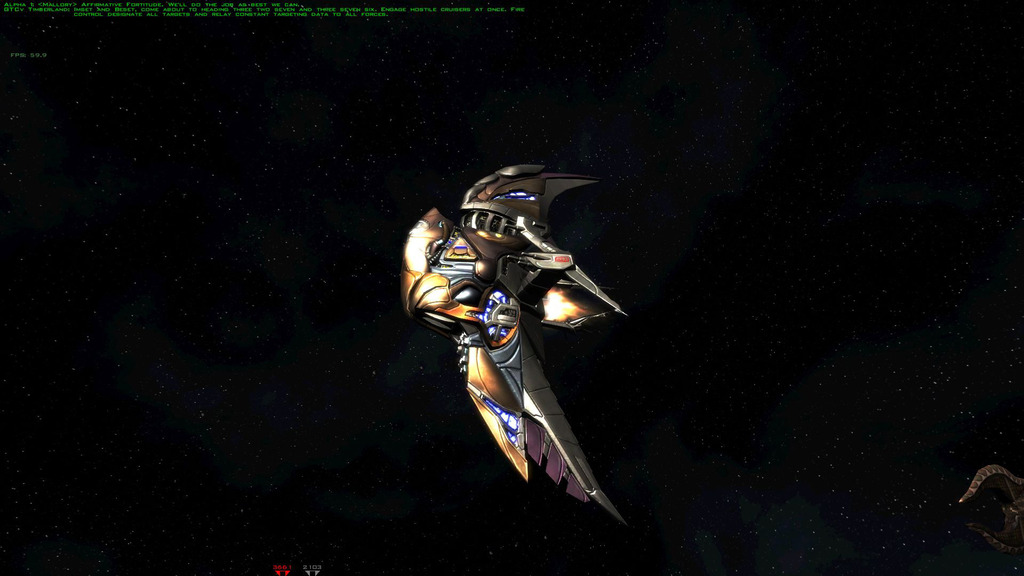 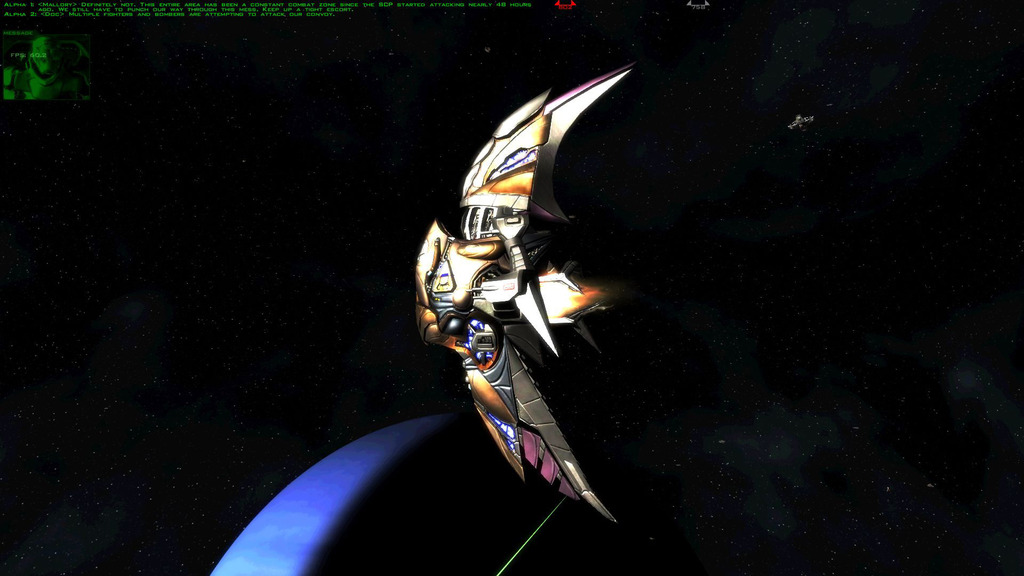 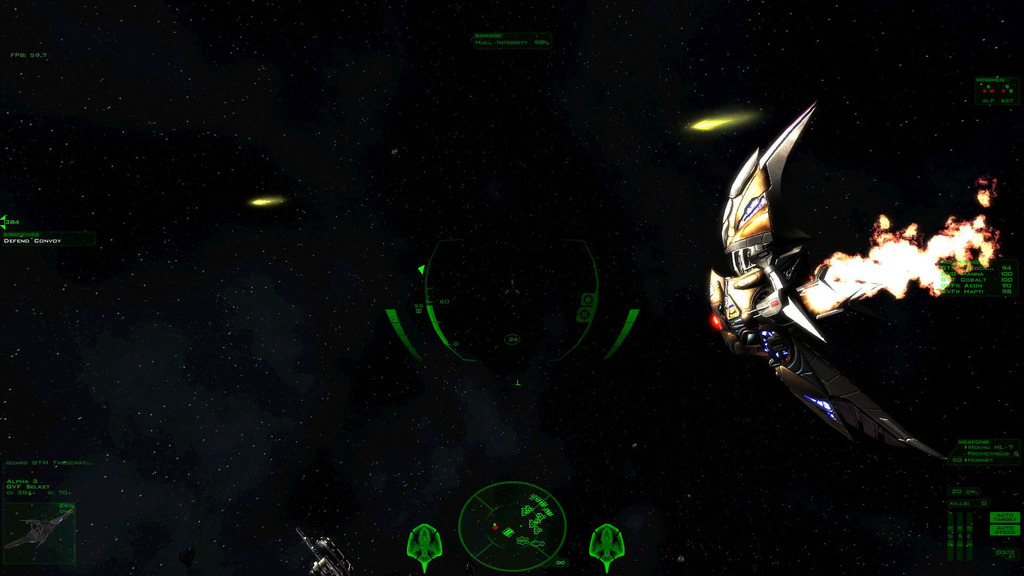 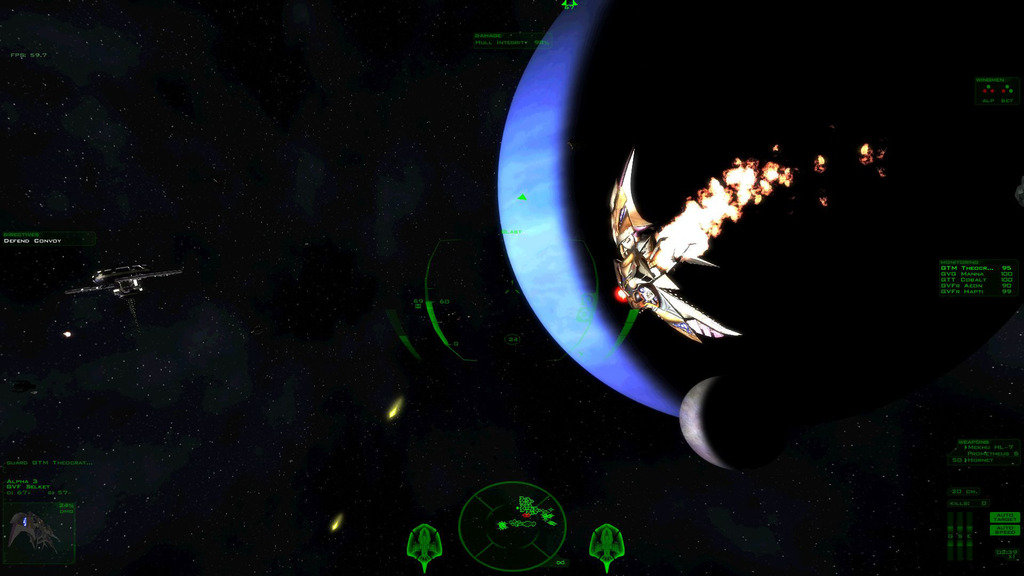 Here's a bonus. I mentioned that we're going to try making these kind of posts once a month, or every 2 months. However, to make up for years of silence, I'll post about another ship in 1 or 2 weeks.

I hope you enjoyed reading this, let us know your feedback. :)