As promised in my last post, the BWO team is proud to present the SMC Freki, Sol's Coalition of Planets (SCP) attack cruiser.

Larger than most other cruisers, the Freki's armament matches its size, making it a fearsome opponent. With dual torpedo launchers, the Freki is as powerful as Sol's Leviathan whilst possessing the speed and anti-fighter defence of the Fenris to match. One-for-one, a Freki can destroy nearly any cruiser in combat. The SMC often deploys them, however to hunt larger vessels with considerable success. Pilots who have seen groups of Freki-class cruisers in action have found it apt to call them 'Terran Liliths'.

Without going too deep into things, I'd like to explain what kind of weaponry the SCP's capital vessels use: Their main anti-capital ship weaponry are Magnetically Accelerated Torpedoes, an hybrid between a Torpedo launcher and a Railgun. The end result is a super fast torpedo, very hard to hit, but with very limited maneuverability.

To tackle fighters, they use a mix of lasers and missiles (short range swarmers and long range dual shot missiles).

The Freki belongs to the most recent technological generation of the SCP's warships, and as such, it also employs a couple of primitive AAA beams.

Like last time, lets take a look at the low-poly version first: 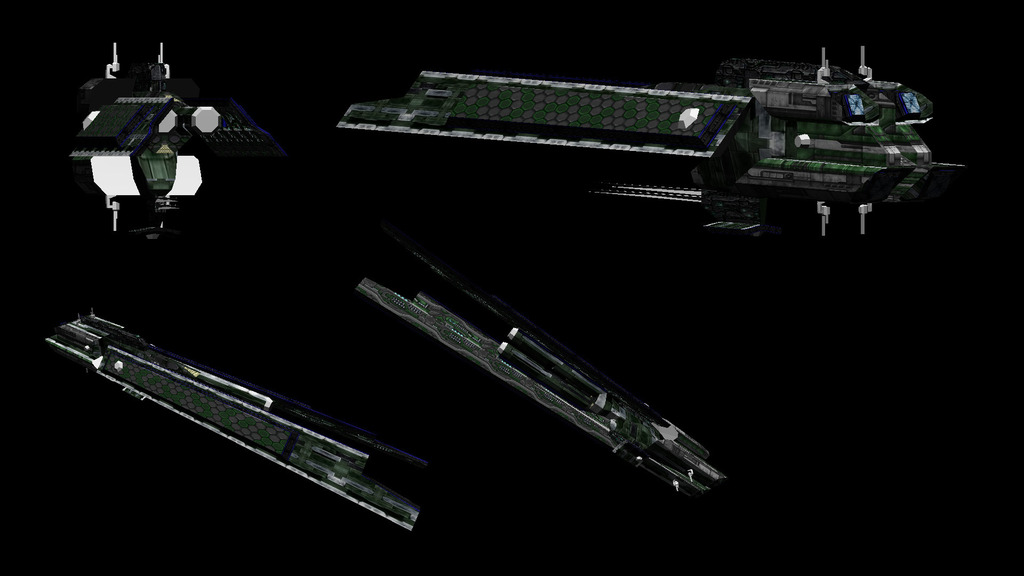 So the things that jump out at me are that the Freki has 2 big sticks! (the MagTorp Launchers), protected by these shield structures on the side. Those are, in my opinion, the selling points of the design, so I want to not only transfer them to the HTL version, but also make them visually stronger.

Another element that I believe is quite cool, is those hexagon shaped panels, so I definitely want to nod at them when I re-work the model. However, I feel that they are too small, given that the Freki is just a cruiser.

Then there's that antenna array, an element shared between all the SCP's capital ships.

Finally, the color scheme. When the low poly models were made, the SCP's ships were all defined by having green and white everywhere, with dark blue lights. However, following discussions have led us to change how we want the SCP's visual identity to be, given their story, economic and political situation. So the color scheme will change. We'll reserve the breakdown of the SCP's design guidelines, and how we reached them for a future post, since it's a whole other topic in itself.

This time I won't go through the same steps as in the Selket's post, since the Freki didn't go through such situations. So here's the final result: 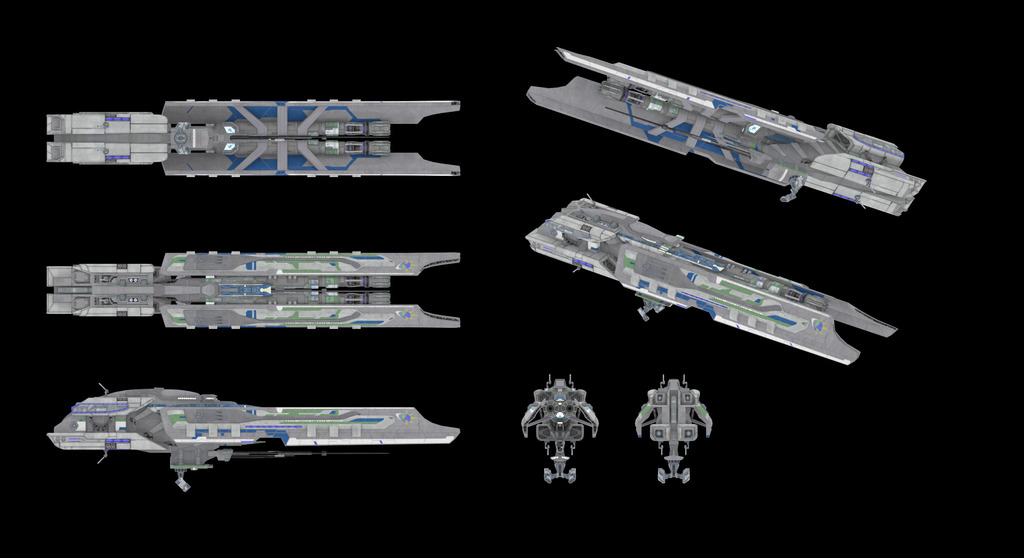 So as you can see, I kept the general shape pretty much intact, but I opted to make the MagTorp launchers longer and more prominent in the design. I also changed the single missile launcher on the bottom to a multi-part turret, it became more vulnerable, but it also has a wider FOV.

Like I mentioned before, the texture scheme was bound to change, not only because the low-poly version was essentially tile textured, but also due to design decisions. In simple terms, the final decision regarding the SCP's color scheme was that in Sol, they don't have the resources to waste on painting their ships completely (not to mention that they are warships), but these guys are very nationalistic, so their ships are kind of like "flying flags" that boast the SCP's colors: blue, green and white. So that's what we have on the Freky, pretty much: most of its colors are derived from the armor materials (metals and ceramic composites) but then we have these bluegreenwhite motifs painted on top. And of course, it has a logo in there to boot! Because them hommies just love the SCP! :D

Now, speaking of motifs, color schemes and etc, take a look at this: 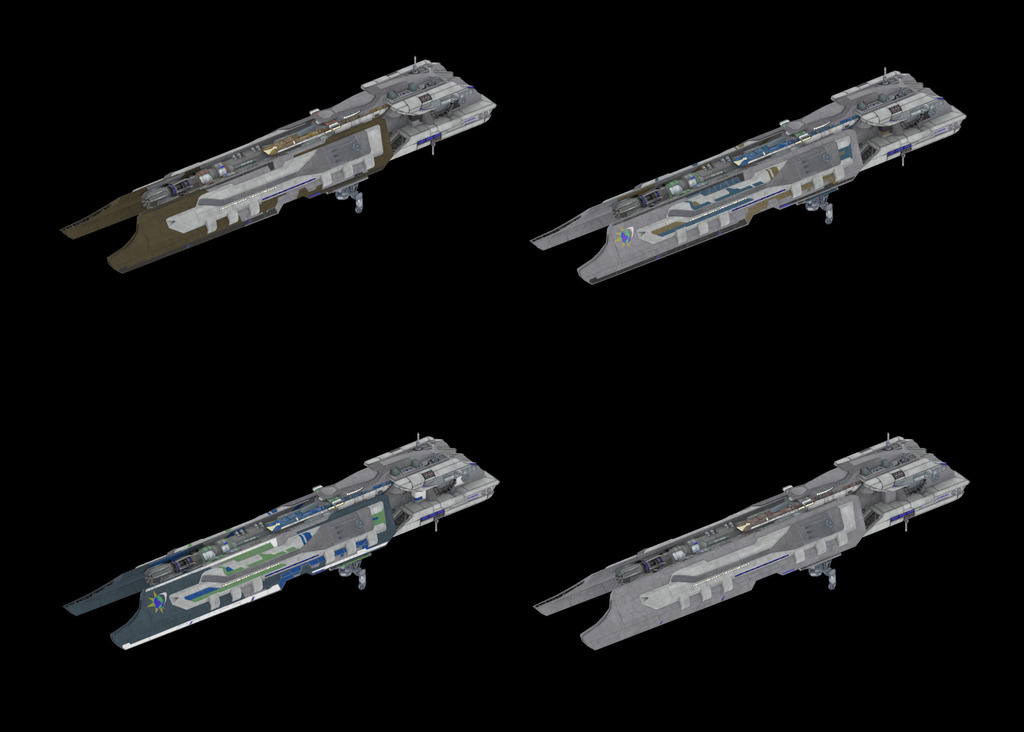 The idea with BWO is that it won't be just a new campaign. It will also be a modpack that you can use and manipulate. What this means, from a development point of view, is that we're taking some care to build things in such a way that you'll be able to easily manipulate the assets as you see fit, to implement them in your own projects.

What this means for you, is that you'll have access to edited PSD files that have specific layers that you can turn on or off, masks that you can use to change colors or apply new texture patterns easily. The 4 above variations were done in literally 2 minutes each. You'll be able to do the same.

You'll be seeing a fair share of Frekis in BWO, and most often than not, you'll have to blow them up (joy!). Which leads me to debris. We're not really satisfied about how debris are usually done: you break the model into boxy chunks, apply a debris texture on a plane and presto! It works very well for fighters and small vessels, but for capital ships, the results end up being a bit too ugly.

We want to take it a bit further, so not only we try to break the model apart in a way that makes more sense, but also show some of the underlying structure of the ship. Here's how the Freki's debris look like, for the ships itself, and for the main batteries: 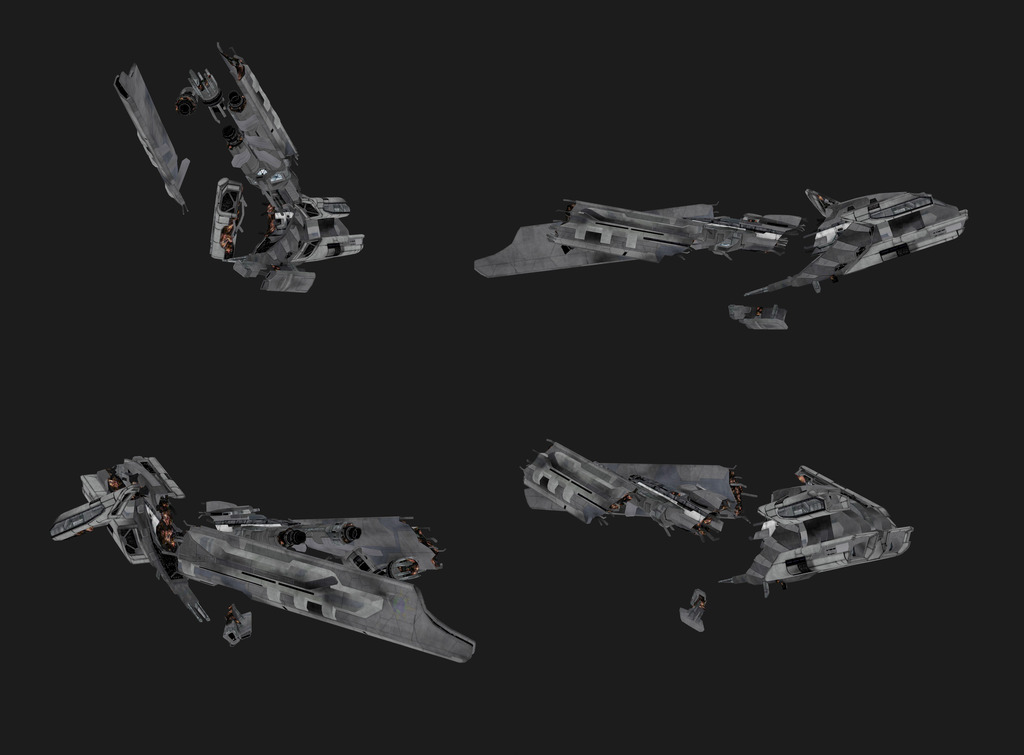 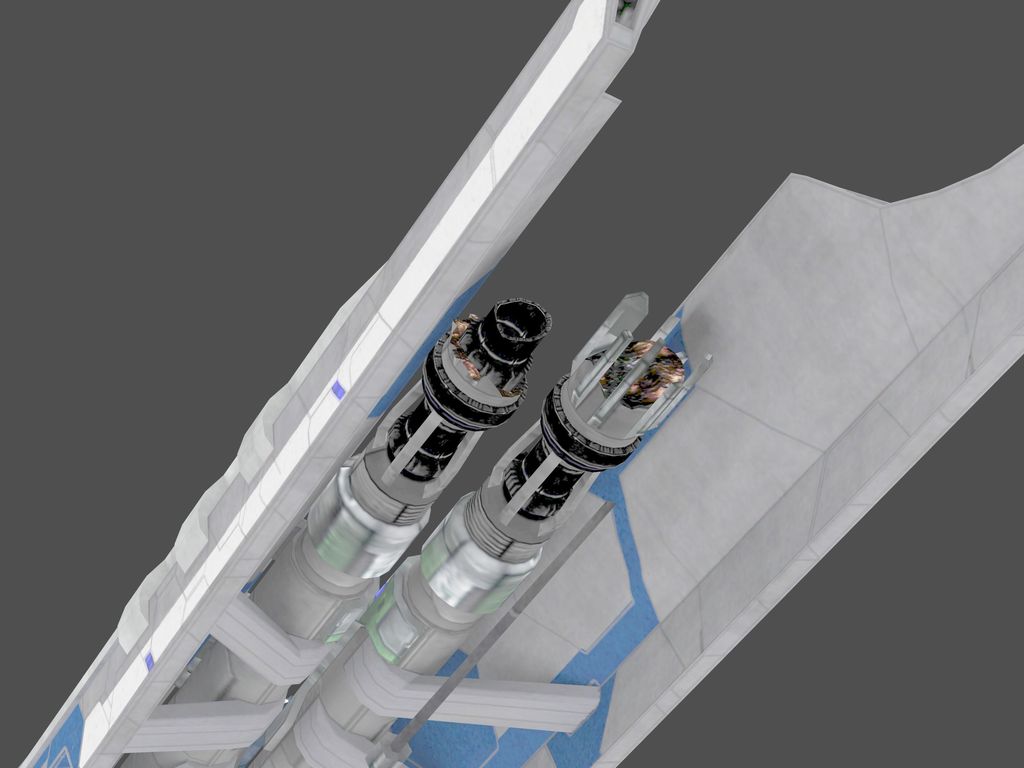 We think these simple additions make debris look more genuine and pleasurable to look at, adding some extra motivation to blow them up :P

What do you think? 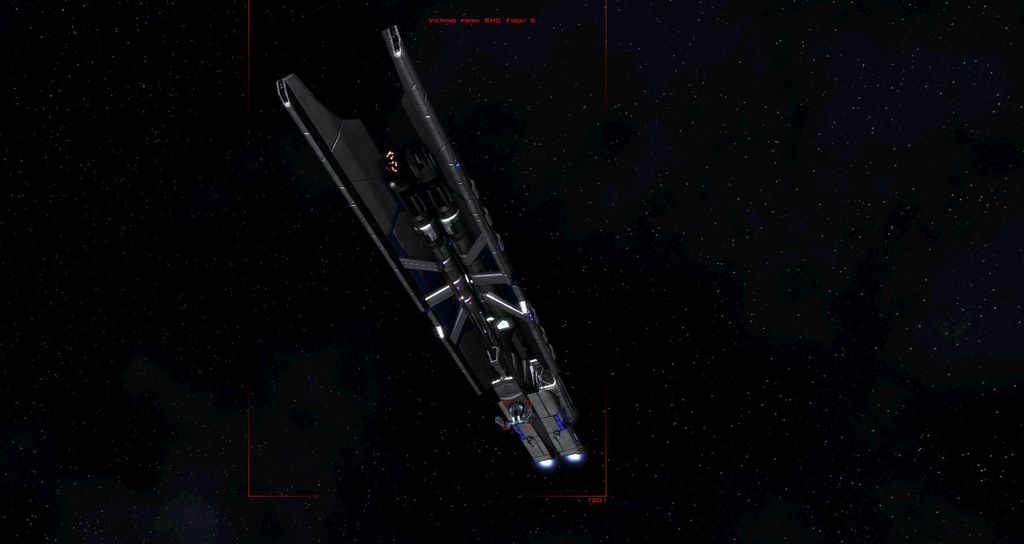 Many times, Frekis travel in pairs. 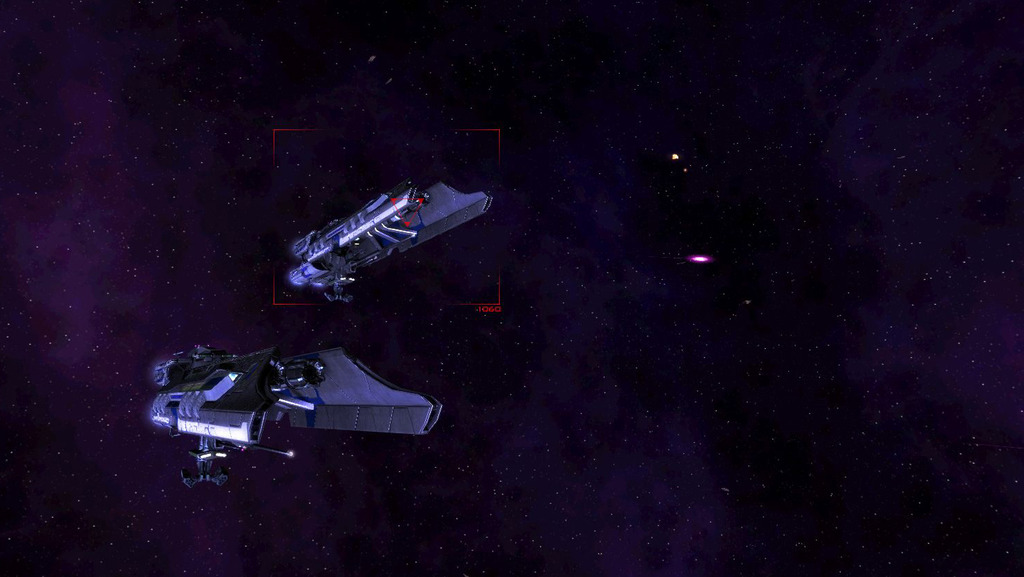 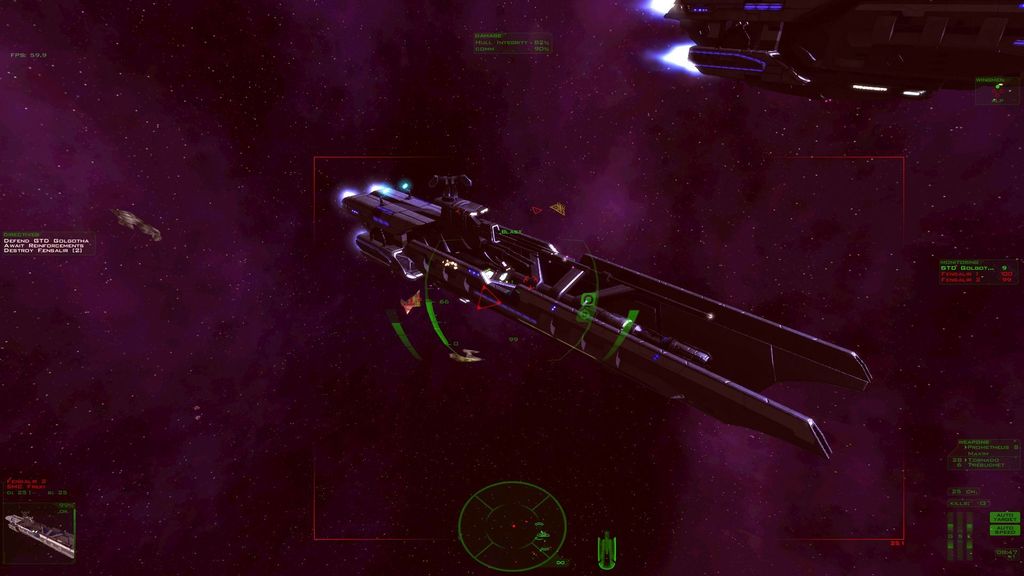 And they can give you a wooping if you're not careful... So that's it for the Bonus Post I promised 2 weeks ago. Let us know what you think!

And stay tuned. There's more coming up next month, or at the most, in 2 months :D